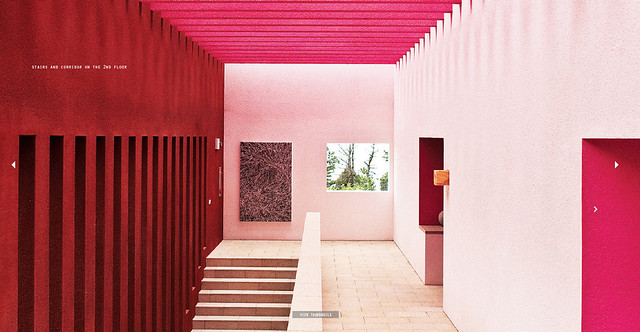 (continua en inglés)  Now, the land owners wish to demolish the building to make way for accommodations for the 2012 World Conservation Congress, to be held this September at the Jeju Conference Center.

The Association of Mexican Residents in Korea has written to the Korean government and Jeju City Hall requesting the preservation and protection of the artistic structure.

The organization representing the 400-strong community here warned that demolition of the building would lead to condemnation from many countries.

”(Legorreta) demonstrated his love of Jeju by placing there one of his most mature and iconic pieces, but the island has forgotten his death less than a year ago in their attempt to destroy the building,” said Claudia Macias de Yoon, President of the Association of Mexican Residents in Korea. “No one in the world will be able to understand this deplorable and tragic situation, and no conscientious Korean will be able to agree to the demolition.“

The association is asking supporters to write to the Korean ministers of foreign affairs and culture, the Seogwipo City mayor and the company planning the demolition.

The decision on the demolition is expected to be made this week.

The building is one of only two examples of Legorreta’s work in Asia, the other being in Japan. It won the award for Best Hotel Construction & Design at the Americas Property Awards 2010.

Legorreta’s buildings can also be seen across Mexico, as well as in the U.S, U.K., Qatar and Nicaragua.

Following the architect’s death in December 2011, the Jeju Island structure was recognized as one of his finest works for its use of intense color, shifting light and connection with nature by circulating water through the building.